Sweaty bodies jostled for space and  seemed to merge into one glistening behemoth with thousands of legs. Balogun is known all over Lagos as the market where legs do not touch the ground.  On a row on Breadfruit Street were the stalls of  the corpulent widow, Alhaja,  MamT mother of eight children and who was just as big as Alhaja and Secretary with a build just like the others and whose husband had just lost his job. They never spoke to each other even though their stalls were lined side by side.

“ Sisi Nurse, I am tired of this fat oh,” Alhaja once said at our weekly health visit. “When a customer comes, getting up from my chair is not easy, she lamented, avoiding the pointed gazes of the others.  The others had told me the same thing at different times, starting with ‘ Sisi Nurse’. It was what I got after six years of medical school, but I couldn’t refuse the call to serve my fatherland. They sold feminine undergarments which had to be brought down when  buyers came calling from nails dangling from rails above. “Foolish idiot!” MamT once said to an unfortunate lady who let her get up from her chair and left without buying anything.
“I have told you before, and explaining as one does to a little child, I went on; plenty meat, plenty  fat, plenty problems” I watched as they all winced at my declaration, but it was not the first time. They were always wincing. Alhaja looked down at her bejeweled fingers, her flesh swollen over all the rings. Now their orders had come again: high mounds of amala, with ewedu soup and those large pieces of assorted meat. But how much meat could one possibly eat?
In private consultation, I tried to scare them by saying, “You know you have obligations to meet,  so if  meat will prevent you from doing your business, why don’t you let it go?”  That seemed to do the trick. A flicker of stern resolve passed through their faces, but it was nursed silently until strength came four weeks later. I watched them from my office across the path. 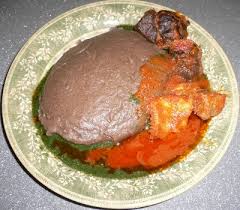 “Ah! Nothing for me today”, Alhaja said, patting her stomach. On hearing this, the others waved the girl away haughtily, patting their own stomachs and looking everywhere except at each other.On this day,  a customer passed by, her eyes lighting up at the colourful display of pants and feeling light and agile the women all gathered momentum and getting up in a swift movement, lunged for the lady reaching for her all at once. Alhaja held on to her arm, MamT her waist, and Secretary her shoulders. The lady beat them off with a handbag of brown leather, bared her teeth and threatened to bite if they did not release her, and muttering about traders who had gone mad, she walked away from them. Despite this, the women sat down with faint smiles on their faces for they had gotten up quicker than usual, and no one had outwitted the other.
Abstaining from meat though was a strain on them. Secretary seemed to be the worst hit, for she said she felt just like the rich man in the Bible, and wished she would have just a little piece of stewed meat to help her out of this “hell”.
“Cool down, it’s not that serious” I said attempting to make light of the ‘grave’ situation.
Three weeks after, they sang a different tune. “ No sales, Sisi Nurse”, Alhaja said when I asked her about business, my eyes focused on the new rings on her right hand. “The customers are always shouting and walking away any time we all get up. I am tired . We are not eating meat and we are not making sales” she concluded, furrowing her brow.
“If these women would just leave my customers alone”, MamT said with a hiss when I got a chance to speak with her.
“Sisi Nurse, what are you saying about this meat matter?” Secretary asked.
Two weeks after, as I walked past sharing health fliers, I glanced in their direction. Secretary was eating a large piece of meat, the oily stew dripping from the sides of her mouth. “Come and eat”, she said to the other women, her eyes large and imploring like a little girl’s. But they didn’t say thank you. They were out of their chairs in seconds and came to eat.