Should it be BLOOD for BLOOD? 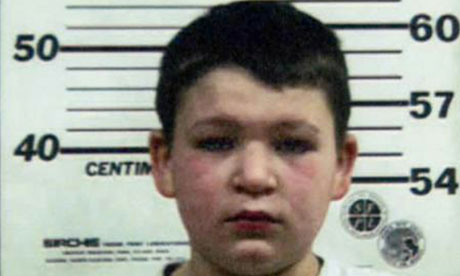 I love ChooChoo so much. I love him because he is my seed and the fruit of my womb. I would still love him if he belonged to someone else, but you see this LOVE I have for him is different: he is my SON.
By the power of God, I would train to fear and love God. I hope and pray that he would appropriate the training and grow up in fact to love and fear God. It would make me very happy.
I hope he never kills anyone, whether the person asked for it through their actions or not.
A young boy in Pennsylvania has been convicted of the murder of his father’s pregnant fiancée who he shot through the back of her head when she was sleeping. He has been in court recently appealing the decision of the US courts to try him as an adult which could land him a life sentence without the opportunity of parole.
Human Rights Groups including Amnesty and the Sentencing Project have decried the decision of the courts and are actively fighting it.
The decision has divided two parents; the parent of the boy killer and the parent of the killed fiancée. The boy’s father is protesting his innocence and says he has no idea what could await him.
"Try to explain to a 12-year-old what the rest of your life means. It's incomprehensible for him, he was quoted as saying in an interview with ABC last year.
The deceased mother on the other hand, understandably distraught about the gruesome murder of her 'baby' and grand baby is pushing for maximum sentence for the boy.

"I can't stand this 'Oh, he's 11,' 'Oh, his clothes don't fit him,'"she told the Pittsburg Review soon after her daughter's death. "He knew what he was doing. He killed my baby."
I READ this whole thing with a lot of heaviness in my heart and pondered on what could have pushed an 11 year old to pump a bullet/bullets in someone’s head.
Could he have felt threatened by his father’s fiancée. Could he have hated the way his father’s attention was turned away from him?

Now: the main bone of contention. Should he be tried as an adult? Is the deceased’s mother a DEVIL for pushing for that? Who is the real devil here?


The final questions; Should it be BLOOD for BLOOD? Is a parent justified in demanding justice for the death of her own? Is another parent selfish in seeking to preserve his child’s life after another’s has been lost and that at the hand of his child?
Questions, questions, questions!
Let’s discuss, people. It’s time to remind ourselves of what we already know and file it away appropriately in our minds for use when occasions demand. But I reject, “ChooChoo, when you grow up, you would not kill anybody in the mighty name of JESUS!
Photo credits: http://www.guardian.co.uk/
Posted by Berry at 11:30 AM